Blue sky and warm sun as I walk along Meridian Street, the very start of my line. On the corner is ‘The Anchor’ pub and I thought it might be interesting to go in and have a chat. I try the doors but its shut, and I try again just in case but no it is shut. ( The pubs in Leith, by the docks were always open really early in the morning. Not in Montrose.) A man watches me from his white van and I think he must be thinking how desperate is she, and I hurry on, red faced, embarrassed.

Into Panmure Place and the museum. I ask Linda and Sue the curators what is their favourite piece in the collection and why. Linda takes me to the smallest Roman gold ring found in a ploughed field not far from here and Sue chooses a fire insurance sign from a building in the town. As she says, from the sublime to the ridiculous. I visit Flo in the toilets and she plays me some of her country and western music saying the customers love a wee dance. In the cafe I meet Hazel and Millie. Millies son was named Johnny after the band Johnny Kidd and the Pirates. She says.. ‘its funny how life’, and then pauses searching for the word before continuing ….’diversifies’, and she laughs ‘that’ll be the egg roll !’, and we talk about how life never turns out how you might imagine.

I visit Kim at the ‘Ropey’ and we walk over the exhibition space, its going to be great as long as I get all the work made. She tells me about following a man who was walking backwards down the street. She followed him for as long as she could and he carried on going in reverse. she said I would have loved it. We wondered why he would be doing this but couldn’t come up with an answer and decided maybe he just wanted to. I think that is reason enough.

On the way back to the car I think about trying the pub again but decide to leave it this week. Probably best…. 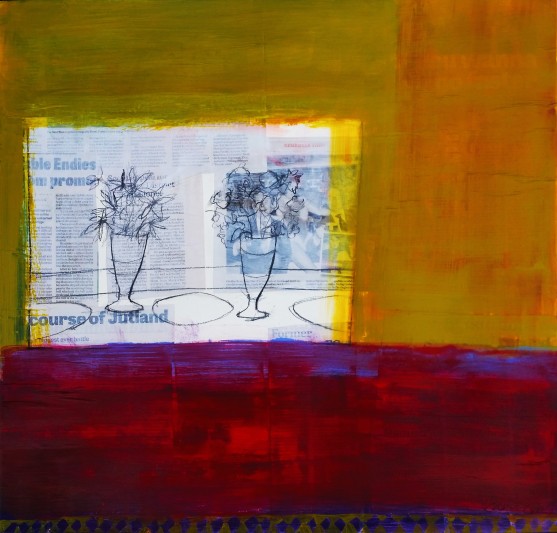 Finished painting of the flowers in the Ladies loo, Baltic Street, Montrose. The title refers to a picture of Morecambe and Wise who appear in the paper and are visible in the painting.

Acrylic and charcoal on Montrose Review.

Ink, charcoal and watercolour on newsprint on plywood. 30x21cm.

Goose grey sky. Wind in the East. Someone is drumming in an upstairs flat. In the museum I take a picture of a bicorne hat, reputedly worn by Napoleon. Chat to a woman about the coming of the daffies. Off the High Street, I pop into the tattoo parlour down the New wynd and am shown around by Damian, the owner. He says mostly the clients are older and return again and again. He speaks of them as a family. Looking around at the framed photos and skateboards on the walls he tells me that he has tried to make the surroundings comfy, like your own home. I ask how he got into the tattoo business and he tells me that he is a screenprinter, oh, and a cook, and a joiner and a builder … At the barbers I give Derek a print of the painting ‘The barbers chair’. He says, ‘The last woman before you to come in here read my palm, for £20.’ I said that wasn’t one of my skills, but said it sounded an interesting idea as part of my practice. I should maybe give it some thought…… Further along the walk I visit ‘Trendy dogs’, the pet grooming parlour and meet Christine and a spaniel in for a trim. There is dog wallpaper on the walls and the smell of wet fur. We talk about grooming newfoundlands, now theres a job, and what its like having your grown up children move back home. She gently combs the spaniels ears. It looks happy. Up at the Hoosie catering portakabin Steve and Kenny a driving instructor chat about driving lessons. Kenny says that often pupils will come to a junction on the right hand side of the road after passing a line of parked cars on the left. He says ‘I turn to them and say bonjour..?!..’  Four hours later as I walk back down by the docks, round the corner from ‘Chips an’ things’ (what things ? ), the person in the upstairs flat is still drumming. I like the circularity of this and the dedication to their craft. Still, I’m glad I don’t live in the flat below and next door along theres a sign in the window , ‘Quiet please, hangover in progress’. What a shame. 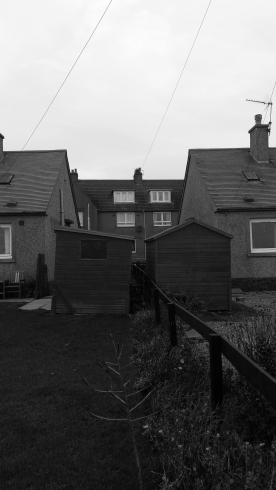 Sparks fly inside the shed. I go inside to see for myself.I meet Gavin and his colleague welding pipes. This is Brookfield Fabricators and Gavin has just finished a four year apprenticeship in welding. Tall, slender bottles of argon gas stand nearby. The other man starts and he tells me to not look at the light. Tells me seriously, as you can get eye burn. I look at him and he says that you can’t open your eyes for the pain that feels like glass behind your eyes. I believe him. Even out the corner of my eye I can sense how bright the light is. I take some pictures and promise to return with a drawing or two.

A streak of orange vomit outside the pub on the corner. A smiling blue haired woman bounces down the Kirkie steps.

I enter the barbers. Am met by Derek and 94 year old Jim in for a trim. Derek has been here since 1979. He had come back into the trade after the years when as Derek said, there wasn’t much call for haircuts what with the Hippies and their long hair.The shop has been a barbers since 1919. He only works three mornings a week, thinks he’ll retire in a couple of years. I record the sound of the clippers and some conversation between Derek and Jim which is overlaid with the sounds of Hot Chocolate singing ‘I believe in miracles, oh you sexy thing’…. Jim gets up to go, zips up his jacket and tells me he’s been coming for a very long time. I ask Derek why barbers poles are red and white and he explains that in an age when barbers were also surgeons, the red and white represented the bloody bandages being hung out to dry. We chat about football and pensions and I record a story about Hamilton Accies and the missing barbers pole. He says he’ll advertise the exhibition in his shop and tells me he’ll come and take a look.

A mannequin in a bridal shop window has an expression of confusion on her face. Her blonde wig slips a little.

In the ‘Coffee Pot’ Rod Stewart sings ‘Maggie ‘. I’m sure he was singing the last time I was in. A woman opposite says she’ll watch my bag when I go to the loo which is outside, next door up a flight of stairs and along a dark corridor. When I return I chat to her and her husband Jack. Maureen tells me about her Grandmother from Lewis who smoked a clay cuttie pipe. I record her story and finish my Victoria sponge. Marge the owner shows me her drawings which she keeps in a folder by the till. They are good. She says customers are getting scarcer, nobody has any money.

I am reading Michel De Certeau,    ‘The practice of everyday life’ . He suggests that walkers are ‘practitioners’ of the city and that the city is made to be walked. Although Montrose is no city , the same can apply. He asserts that in some sense walking is like speaking, and the the city is the language. If one were to cease walking then the stories and language of the space will likewise cease to exist. Rebecca Solnit in ‘Wanderlust’ refers to Christophe Bailly who speaks of Paris …’as a collection of stories, a memory of itself made by the walkers of the street. Should walking erode, the collection may become unread or unreadable’. (p.213 -‘ Wanderlust’. )

I return to the car to find the windscreen covered in seagull poo. The squooshey is empty too so fling a bottle of fizzy water at it and head back over the bridge .

Sitting in the sun on the golf course in Montrose – the worlds 5th oldest, I hear a buzzing and remember the model aero club go flying on a Thursday so I follow the noise to a big expanse of municipal playing fields. I walk over to the group of fliers and have a chat with Heather who is learning to fly.She is sitting in a camping chair in a sleeping bag to keep warm and she tells me that she was introduced to model planes through her partner Arthur. I comment that the planes have little pilots which I find funny and Arthur shows me a picture on his phone of a miniature model of himself sitting inside a vintage aircraft – a sort of aviation selfie. Another man’s  Airforce Hercules type plane actually drops tiny paratroopers from its cargo hold as it flies over. Except not today, which is a shame. He says he loses quite a few as they are can get carried away on the wind ending up who knows where. I am imagining platoons of model paras on exercise in the Angus hills….